The military base of Junin de los Andes

We arrived early to Junín de los Andes in the northern Argentinian Patagonia. We had left San Martín de los Andes around 11 am, but the distance between these two towns was roughly 40 kilometers so the riding was easy and fast. We left behind all the green forests and the high mountains as we started to approach to the flat steppes or “pampas”, the usual landscape on most of the southern Ruta 40. The contrast of this new landscape was amazing.

Around 3 pm we were in town and our goal was to get supplies from the supermarket. It wasn’t difficult to find as it was on the main street. In no time we were done with this and after paying a visit to some highlights of the city we decided to leave the urban area in order to find a spot to camp for the night. Junín de los Andes was not an attractive city to us and the urban area is not pleasant for bicycle travelers of the like of us. Further north, around 5 kilometers from town there was a river and maybe an option for a good wild camping spot, so we headed north.

Rivers are usually a good landmark to find suitable wild camping places, bridges offer a good roof and in Patagonia is quite common to find them clean and with drinkable water. There was a bicycle path till the end of the city and soon the countryside showed up, all sorts of green and yellow fields through the flat lands. Once the bicycle path ended military facilities started to appear on both sides of the road and soon the bridge that signaled the river we had seen on the map. We had two options, either keep on the road going north or find a camping spot on the river bed following a new road that showed up. We opted for the riverbed and followed this new road.

We went through the road a few hundred meters till we spotted a nice and clean space to put the tent and enjoy the rest of the afternoon. We were in public space around 15 meters away from the river. A light forest covered the area and despite we could be seen from the road you had to actually pay attention to the place to spot us. On the other side of the road the military land and a fence protecting the area.

We placed the tent and put everything in order to chill out before cooking dinner. It was early and we had plenty of light for doing our businesses. The weather was nice and the breeze was warm. After setting up camp and chilling for a while we slowly started with the process of cooking our dinner. Lentils was the menu for the night. While I was starting the stove some military guys showed up behind the fence at the other side of the road. They started to stare at us and talked some mumble jumble to themselves. They left. We didn’t really pay mind to them as they were across the road behind their fence and we were in public space next to the river. A road separated us so I thought there was nothing to worry about. I kept cooking the lentils.

Lentils are a really good source of protein and they replace meat pretty well as other grains do too. Mixing them with sausages gives them an awesome taste and you get some welcome excess of proteins. And when you add Chilean merkén they are delicious. Most of the time there are no sausages as ingredient, but merkén must never lack.

Some time went on and the lentils were almost done. The military people arrived again. This time there was another man in the group. Older and taller than the rest of the guys in the party. It seemed like he was another kind of soldier. They started to stare at us and talked again, I tried to overhear but it was impossible to understand what they were arguing about. I thought about waving at them and saying hi but they didn’t even tried to make contact with us. Suspicious. I got a bad feeling about the situation but what could be wrong?, we were in public land and not really doing anything bad as drinking or making a bonfire. We weren’t even in military territory. I just kept cooking. The men stared at us for a couple of minutes and left in a hurry. 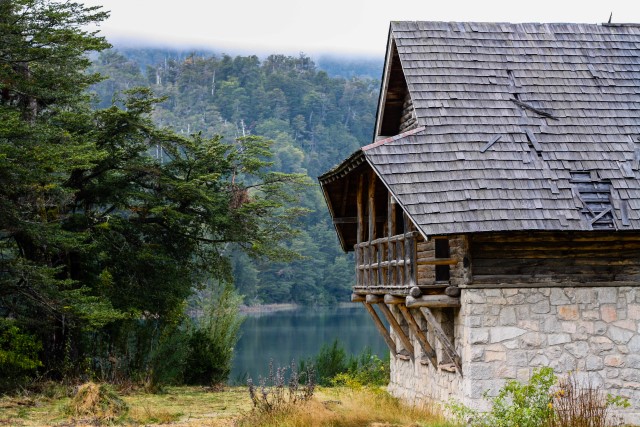 I finished the lentils right when the sun was setting over the horizon, they tasted really good. We were hungry, so after letting them rest for some minutes we started having them. We were right at this when in the distance some flashing red and blue lights started to spark on the trees. A police car was approaching. My guts reminded me about the military people showing up earlier. The police car passed in front of us and went its way. They may not be here for us I thought. As they came, they were gone. But the lights never disappeared and soon they were coming again but this time the police car parked right in front of where we were. Two officers came down the car and pointed some flashlights at our spot. It was already dark. They started to come to us. And we got one of those oh shit moments.

– Good afternoon dear people – said the police officer, quite a nice surprise, he approached us in a really polite way.

– Good afternoon sir, how are you doing? – I replied.

– I’m good thank you. I’m really sorry to bother you while you are having dinner, Where are you guys from? –

– We are from Chile, we come from southern Chile riding our bicycles, is there any problem officer? –

– Actually yes, we’ve got a call from the military police which is in front of that road there, and they gave us notice that you were camping here. Sadly you can’t stay here because the military are sort of annoyed by your presence, so I’m going to have to ask you to please leave this place. –

– Well.. you see… – the officer sort of got complicated to give a proper answer. – strictly you are only allowed to camp in authorized areas, and this place is not a such, but the biggest problem here is that the military police saw you and they are picky about people being around them, so I strongly suggest you that you leave this place, but please feel free to finish your dinner and then you leave. There is an authorized camping spot around 15 kilometers down this road so there you can camp – he sort of knew we wouldn’t go there but he certainly wanted us to leave this place.

– Oh, I see, well then, if you don’t mind us finishing eating, we will move once we are done –

– yes please, don’t stay here, is dangerous, I may have to ask you some information from yourselves before I leave –

The partner of the officer then asked us our names, ID numbers, the date we had entered Argentina, where we were heading and where we were from, even our addresses in Chile. After that they politely wished us for a nice meal and a safe night and insisted in that we had to leave and not spend the night there. As they came, they left.

I was seriously amazed by how polite the officer had been. Since ever I’ve heard stories of how you can’t trust the Argentinian police, how they would bribe you if they could and all sort of weird stories, but it seemed they were much nicer and more educated than the Gendarmes that searched me at El Chaltén (that’s for another story).

We felt in despair. It was already night and packing all the things at night sucks. Everything was ready to finish eating and then go to sleep, but well, so it’s life sometimes. Right before we were done having dinner 3 military guys showed up behind the fence. They were carrying rifles this time and pointed flash lights at us but didn’t say a thing. They kept pointing the lights to our location for some minutes and then turned down the flashlights, still they remained guarding the place, from us… the chilean invaders that wanted to take over a whole regiment (?)

We finished our dinner and felt the pressure to move from the place. The military guys would keep staring at us and as soon as we started moving to pack our things they yelled something not understandable, one of them had the flashlight pointing at us and the other two were looking at us with rifles in hand. We cleaned the dishes, we packed the sleeping bags, and unmounted the tent, mounted everything back over the bicycles and started to get ready to move from the place.

It wasn’t easy to put the bike on the road again as there was no path to get to the road and it was dark. We had to do some pushing in order to get to the road level and face a small slope before reaching the shoulder. I did it first and left the bike there in order to help my partner. The military started to shout things to each other. The guy with the flashlight ran towards our location but always behind his fence and wouldn’t say a thing to us. I went down to help with the pushing of the other bike. As we reached the road my own bike fell to the ground. The military got scared of the sound and started shouting gibberish and aimed their rifles towards us while also screaming something I could not understand. A whistle sounded in the air, repeatedly. Maybe they wanted me to freeze?. What the actual fuck is going on here? I thought, well fuck it, I am on my way and moving away from here, I don’t give a fuck about you guys, I said. My partner looked at me and asked what to do. I just said keep going, we have no business with them and them none with us. We hoped on the bikes and started to move away from the place. The guy with the whistle kept blowing it and pointing his flashlight to us. The guys with the rifles followed our movement aiming at us all the time, ready to shoot maybe?. I don’t know, I hope not, we were in public space.

We went back to the bridge. There was no sign of the riflemen and the whistle guy couldn’t be heard any longer. They didn’t follow us and there was no one to be seen on the fence all the way back to the bridge. They were there just because of us. All that fuzz for a couple of riders across the road spending the night there. We weren’t even partying or drinking. I wonder how they would react if someone tried to actually enter their facilities or was a real threat to their regiment, maybe they would kill him.

We ended up riding through the night for some kilometers. Found a spot next to the road that seemed ok for spending the night. Set up camp again and tried to sleep, but of course, after such an experience, it was not easy. This time no one came to bother us through the night and at some point we fell to sleep.