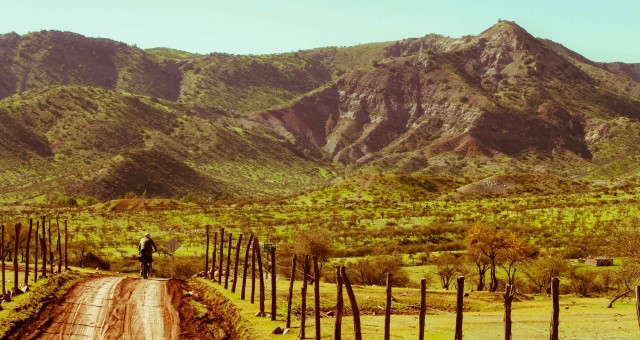 We left San Felipe not that early. The idea was to avoid the midday heat but the morning pipes make breakfasts go diffuse. We ended up leaving later than 10 am, obviously after some smokes that helped for motivation for the road. People would stare at the amount of pack over the bicycles. Through the sights some people would yell things to cheer us up; “Good trip travelers!”, “Watch out with the heat lads!”, “Bring me a flower from the desert sweet heart!”.

It took us a couple of hours to leave the populated areas and reach the base of the Tartaro climb. We crossed Putaendo with no stop. And as usual, as the plan ends up happening in whatever way but not how it was planned, we were at the base of the climb at the heat hour. You could really feel the heat in the body. There was not much to be done to be honest. We were already there and it was our fate to go up at this time of the day. There was to go up, nothing else. 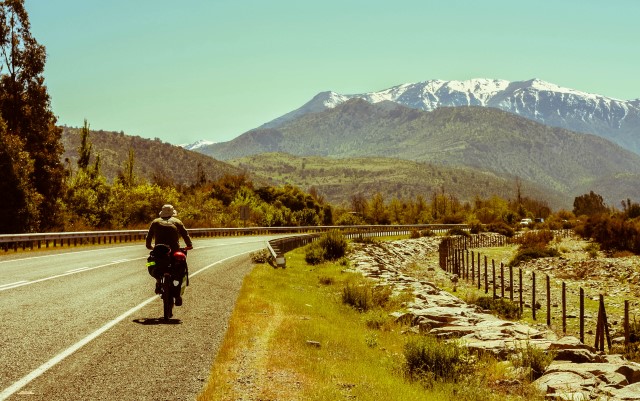 We talked with Pedro on how we would do it. At the summit we would wait for the heat to go away a bit. A good siesta would be really good after the effort of climbing. We parted. We decided each of us should do the climb following his own rhythm. It was the only way to find the personal equilibrium and not die in the attempt. Specially in this case that I have been pedaling for several months already and Pedro is starting to cycle longer distances. He was OK with this as he said it would be much better for both of us.

At the end it wasn’t that much, only 4 kilometers, but the heat, oh man the heat. While going up my main thought was about a cold beer, very cold beer. I would yell it to the skies. This helps up with the motivation. My water bottle, that is not thermal or of any special material doesn’t keep the fluids cold in any way. Taking a sip of the bottle was almost like drinking tea. The mind always shows up in these sort of situations and the thought of a beer truck at the summit popped up from nowhere. It would be beautiful to find a beer truck at the top and be able to buy a beer from it. Crazy things show up from the mind from time to time.

It didn’t take long to reach the summit, around 40 minutes only, but the heat made it look like two hours. From Pedro not even a glimpse. Parting from each other was the best we could do to follow our own pace. I started searching for some shadow to escape the burning sun of 2 pm. 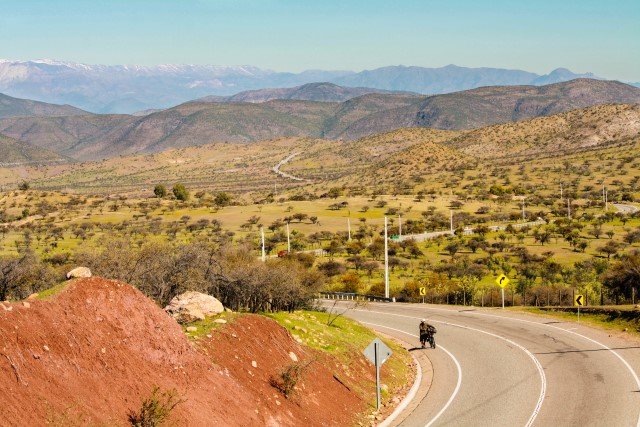 Lucky for me there were a couple of trees at a small slope that offered good shelter and a perfect spot for a siesta to avoid the sun. The sight from the summit was wonderful, the Andes mountains at its best. Despite the heat and the sweating, it was completely worth to be there and then. Beers were the only thing lacking to make the moment simply perfect.

My bike was parked right next to the road while I looked for Pedro on the distant horizon. No sight of him yet. Cars were passing by and from time to time someone would honk to say hi. Sometimes someone would even yell something. Then a blue and really old pick up stopped in front of my bicycle. The driver started waving signaling me to come down from the slope I was at. From the co-pilot side a lady showed up and waved too. Nothing really crossed my mind. Usually on these sort of situations the instinct tells you if its good or bad what is coming. This time the instinct told me to go down straight towards the lady. From the distance I started greeting the woman who greeted back and extended her arm; “For the heat and the thirst” she smiled. In her hand a can of beer. With surprise and huge gratitude I couldn’t help it but laugh and say thank you a million times. When I touched the can it was cold, cold as from a fridge. The lady smiled again and went back to the pick up not saying anything else. From the driver side I saw a hand waving good bye. The pick up disappeared as it showed up.

In shock I went back to the shelter of the trees and opened the beer. A gift from the gods for the effort and an answer to my prayers to the sky. From Pedro still not a sight. I decided to keep half the beer for him although certainly it would be warm for the time he would arrive. He showed up after an hour or so. “I saved some beer for you man”, “you are crazy dude” he answered thinking I was joking. When I told him what happened he didn’t believe it until I passed him the beer. I told him the gods had listened to my prayers. He didn’t say a thing and sipped up the beer.